Monty Python (sometimes known as The Pythons) were a British surreal comedy group who created the sketch comedy show Monty Python's Flying Circus, which first aired on the BBC on 5 October 1969. Forty-five episodes were made over four seasons. The Python phenomenon developed from the television series into something larger in scope and impact, including touring stage shows, films, numerous albums, several books, and a stage musical. The group's influence on comedy has been compared to the Beatles' influence on music. Broadcast by the BBC between 1969 and 1974, Flying Circus was conceived, written, and performed by its members Graham Chapman, John Cleese, Terry Gilliam, Eric Idle, Terry Jones, and Michael Palin. Loosely structured as a sketch show, but with an innovative stream-of-consciousness approach (aided by Gilliam's animation), it pushed the boundaries of what was acceptable in style and content. A self-contained comedy team responsible for both writing and performing their work, the Pythons had creative control which allowed them to experiment with form and content, discarding rules of television comedy. Their influence on British comedy has been apparent for years, while in North America, it has coloured the work of cult performers from the early editions of Saturday Night Live through to more recent absurdist trends in television comedy. "Pythonesque" has entered the English lexicon as a result. In a 2005 UK poll to find "The Comedian's Comedian", three of the six Pythons members were voted by fellow comedians and comedy insiders to be among the top 50 greatest comedians ever: Cleese at No. 2, Idle at No. 21, and Palin at No. 30. 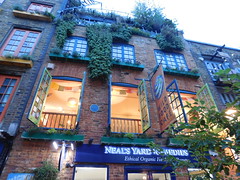