Member of the Most Excellent Order of the British Empire, cricketer, barrister, politician, statesman, Knight Bachelor (from 1962), first black peer (from 1969), and Baron Constantine (from 1969)

Learie Nicholas Constantine, Baron Constantine, (21 September 1901 – 1 July 1971) was a West Indian cricketer, lawyer and politician who served as Trinidad's High Commissioner to the United Kingdom and became the UK's first black peer. He played 18 Test matches before the Second World War and took the West Indies' first wicket in Test cricket. An advocate against racial discrimination, in later life he was influential in the passing of the 1965 Race Relations Act in Britain. He was knighted in 1962 and made a life peer in 1969. Born in Trinidad, Constantine established an early reputation as a promising cricketer, and was a member of the West Indies teams that toured England in 1923 and 1928. Unhappy at the lack of opportunities for black people in Trinidad, he decided to pursue a career as a professional cricketer in England, and during the 1928 tour was awarded a contract with the Lancashire League club Nelson. He played for the club with distinction between 1929 and 1938, while continuing as a member of the West Indies Test team in tours of England and Australia. Although his record as a Test cricketer was less impressive than in other cricket, he helped to establish a uniquely West Indian style of play. He was chosen as one of the Wisden Cricketers of the Year in 1939. During the Second World War, Constantine worked for the Ministry of Labour and National Service as a Welfare Officer responsible for West Indians employed in English factories. In 1943, the manager of a London hotel refused to accommodate Constantine and his family on the grounds of their race; Constantine successfully sued the hotel company. Commentators recognise the case as a milestone in British Racial Equality. Constantine qualified as a barrister in 1954, while also establishing himself as a journalist and broadcaster. He returned to Trinidad in 1954, entered politics and became a founding member of the People's National Movement, subsequently entering the Trinidad government as minister of communications. From 1961 to 1964, he served as Trinidad's High Commissioner to the United Kingdom and, controversially, became involved in issues relating to racial discrimination, including the Bristol Bus Boycott. In his final years, he served on the Race Relations Board, the Sports Council and the Board of Governors of the BBC. Failing health reduced his effectiveness in some of these roles, and he faced criticism for becoming a part of the British Establishment. He died of a heart attack on 1 July 1971, aged 69. 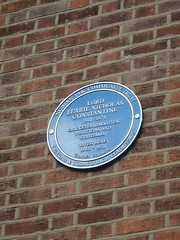