Ellen Cicely Wilkinson PC (8 October 1891 – 6 February 1947) was a British Labour Party politician who served as Minister of Education from July 1945 until her death. Earlier in her career, as the Member of Parliament (MP) for Jarrow, she became a national figure when she figured prominently in the 1936 Jarrow March of the town's unemployed to London, to petition for the right to work. Although unsuccessful at that time, the march provided an iconic image for the 1930s, and helped to form post-Second World War attitudes to unemployment and social justice. Wilkinson was born into a poor though ambitious Manchester family, and embraced socialism at an early age. After graduating from the University of Manchester she worked for a women's suffrage organisation and later as a trade union officer. Inspired by the Russian Revolution of 1917, Wilkinson joined the British Communist Party, and preached revolutionary socialism while seeking constitutional routes to political power through the Labour Party. She was elected Labour MP for Middlesbrough East in 1924, and supported the 1926 General Strike. In the 1929–31 Labour government she served as Parliamentary Private Secretary to the junior Health Minister. Following her defeat at Middlesbrough in 1931, Wilkinson became a prolific journalist and writer before returning to parliament as Jarrow's MP in 1935. She was a strong advocate for the Republican faction in the Spanish Civil War, and made several visits to the battle zones. During the Second World War Wilkinson served in Churchill's wartime coalition as a junior minister, mainly at the Ministry of Home Security where she worked under Herbert Morrison. She supported Morrison's attempts to replace Clement Attlee as the Labour Party's leader; nevertheless, when he formed his postwar government Attlee appointed Wilkinson as Minister of Education. By this time her health was poor, the legacy of years of overwork. She saw her main task in office as the implementation of the wartime coalition's 1944 Education Act, rather than the more radical introduction of comprehensive schools favoured by many in the Labour Party. Much of her energy was applied to organising the raising of the school leaving age from 14 to 15. In the exceptionally cold English winter of 1946–47, she succumbed to a bronchial disease, and died after an overdose of medication which the coroner at her inquest declared was accidental. 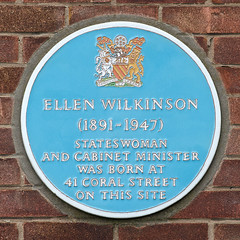 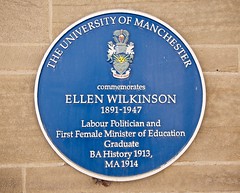 Ellen Wilkinson (1891-1947) Stateswoman and Cabinet Minister, was born at 41 Coral Street on this site.

Balsam Close, Brunswick, Manchester, United Kingdom where they was born (1891)