reformer, promoter of public libraries, and Member of Parliament

HANSARD 1803–2005 → 1860s → 1863 → July 1863 → 17 July 1863 → Commons Sitting RESIDENCES OF DECEASED CELEBRITIES.—QUESTION.HC Deb 17 July 1863 vol 172 cc986-7 986 §MR. W. EWART said, he rose to ask the First Commissioner of Works, Whether, through the agency of the Metropolitan Board of Works, or otherwise, it may be practicable to have inscribed on those houses in London which have been in habited by celebrated persons, the names of such persons. The places which had been the residences of the ornaments of their history could not but be precious to all thinking Englishmen; and when he reminded the House how rich the metropolis was in such associations, he thought they would agree with him that it was desirable some record should be placed upon the respective localities. Thus, Milton lived in a garden-house in Petty France, now No. 19, York Street, Westminster; Newton's house in St. Martin's Street, south side of Leicester Square, was now an hotel; Dryden died at No. 43, Gerard Street; Prior lived in Duke Street, Westminster; Sir Joshua Reynolds lived in the centre of the west side of Leicester Square; Hogarth lived in part of the Sablonièrre hotel; Flaxman at 7, Buckingham Street, Fitzroy Square—his studio was still there; Dr. Johnson died at 8, Bolt Court, Fleet Street; Goldsmith at 2, Brick Court, Temple; Gibbon at No. 7, Bentinck Street; Garrick 987 at the centre house, Adelphi Terrace; the great Duke of Marlborough died in Marlborough House; Lord Somers's house was still in Lincoln's Inn Fields; Lord Mansfield lived in King's Bench Walk; Samuel Rogers lived in St. James's Place, and Lord Macaulay in the Albany. Other nations were in the habit of preserving memorials of their great men, and there was no reason why we should not follow their example. In what way it should be done it was not for him to prescribe, although he had made a suggestion in his Question; but at least he hoped that the few remarks he had made would have the effect of calling attention to the subject.

William Ewart (1 May 1798 – 23 January 1869) was a British politician. In 1863, Ewart conceived the idea of a Blue plaque to commemorate a link between a location and a famous person or event, serving as a historical marker. It is the oldest such scheme in the world. 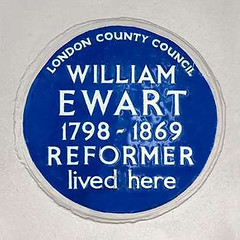 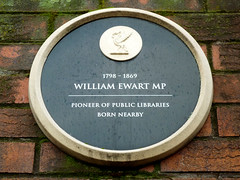