Sir William Garrow PC KC FRS (13 April 1760 – 24 September 1840) was a British barrister, politician and judge known for his indirect reform of the advocacy system, which helped usher in the adversarial court system used in most common law nations today. He introduced the phrase "presumed innocent until proven guilty", insisting that defendants' accusers and their evidence be thoroughly tested in court. Born to a priest and his wife in Monken Hadley, then in Middlesex, Garrow was educated at his father's school in the village before being apprenticed to Thomas Southouse, an attorney in Cheapside, which preceded a pupillage with Mr. Crompton, a special pleader. A dedicated student of the law, Garrow frequently observed cases at the Old Bailey; as a result Crompton recommended that he become a solicitor or barrister. Garrow joined Lincoln's Inn in November 1778, and was called to the Bar on 27 November 1783. He quickly established himself as a criminal defence counsel, and in February 1793 was made a King's Counsel by HM Government to prosecute cases involving treason and felonies. He was elected to Parliament in 1805 for Gatton, a rotten borough, and became Solicitor General for England and Wales in 1812 and Attorney General for England and Wales a year later. Although not happy in Parliament, having been returned only for political purposes, Garrow acted as one of the principal Whig spokesmen trying to stop criminal law reform as campaigned for by Samuel Romilly and also attempted to pass legislation to condemn animal cruelty. In 1817, he was made a Baron of the Exchequer and a Serjeant-at-Law, forcing his resignation from Parliament, and he spent the next 15 years as a judge. He was not particularly successful in the commercial cases the Exchequer specialised in, but when on Assize, used his criminal law knowledge from his years at the Bar to great effect. On his resignation in 1832 he was made a Privy Councillor, a sign of the respect HM Government had for him. He died on 24 September 1840. For much of the 19th and 20th centuries his work was forgotten by academics, and interest arose only in 1991, with an article by John Beattie titled "Garrow for the Defence" in History Today. Garrow is best known for his criminal defence work, which, through the example he set with his aggressive defence of clients, helped establish the modern adversarial system in use in the United Kingdom, the United States, and other former British colonies. Garrow is also known for his impact on the rules of evidence, leading to the best evidence rule. His work was cited as recently as 1982 in the Supreme Court of Canada and 2006 in the Irish Court of Criminal Appeal. In 2009, BBC One broadcast Garrow's Law, a four-part fictionalised drama of Garrow's beginnings at the Old Bailey; a second series aired in late 2010. BBC One began broadcasting the third series in November 2011. 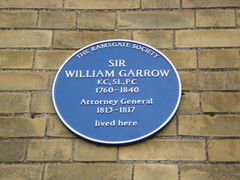