woman, deviser of the Norwich sol-fa music reading system, and originator of the Tonic sol-fa notation 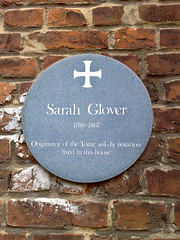 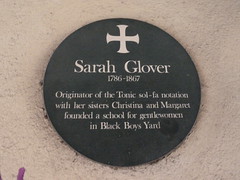 Sarah Glover 1786-1867 The Norwich sol-fa is a music reading system devised by Sarah Glover in the 19th century. This technique utilized the ancient set of syllables do, re, mi, fa, sol, la, ti, which allowed people to sight-read music more easily. Her methods became well known across the county and were later used by the Rev. John Curwen as the basis of his Tonic Sol-fa system. There is a memorial to her in the church.

St Benedicts Street, Norwich, United Kingdom where they is commemorated

Sarah Glover 1786-1867 Originator of the Tonic sol-fa notation, with her sisters Christina and Margaret founded a school for gentlewomen in Black Boys Yard.

The Merchants of Colegate public house, Colegate, Norwich, United Kingdom where they was