Filippo Antonio Pasquale de' Paoli FRS (Italian: [fiˈlippo anˈtɔːnjo paˈskwaːle de ˈpaːoli]; French: Pascal Paoli; 6 April 1725 – 5 February 1807) was a Corsican patriot, statesman and military leader who was at the forefront of resistance movements against the Genoese and later French rule over the island. He became the president of the Executive Council of the General Diet of the People of Corsica and wrote the Constitution of the state. The Corsican Republic was a representative democracy asserting that the elected Diet of Corsican representatives had no master. Paoli held his office by election and not by appointment. It made him commander-in-chief of the armed forces as well as chief magistrate. Paoli's government claimed the same jurisdiction as the Republic of Genoa. In terms of de facto exercise of power, the Genoese held the coastal cities, which they could defend from their citadels, but the Corsican republic controlled the rest of the island from Corte, its capital. Following the French conquest of Corsica in 1768, Paoli oversaw the Corsican resistance. Following the defeat of Corsican forces at the Battle of Ponte Novu he was forced into exile in Britain where he was a celebrated figure. He returned after the French Revolution, of which he was initially supportive. He later broke with the revolutionaries and helped to create the Anglo-Corsican Kingdom which lasted between 1794 and 1796. After the island was re-occupied by France he again went into exile in Britain where he died in 1807. Paoli was idolized by a young Corsican nationalist named Napoleon Bonaparte. The Bonapartes had assisted him during the French invasion, but refused to go into exile with him and pledged allegiance to King Louis XV. Paoli saw the Bonapartes as collaborators, and upon regaining power during the French Revolution he tried to prevent Napoleon from returning to his position in the Corsican National Guard. In May 1793 Paolists detained Napoleon on his way to his post (though he was soon released), ransacked his home, and formally outlawed the Bonapartes via the Corsican parliament. These events and others in 1793 accelerated Napoleon's transition from Corsican to French nationalism. Napoleon never fully outgrew his fondness of Paoli, and had mixed feelings about him throughout the rest of his life. 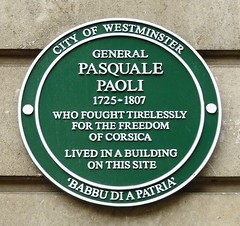