Dadabhai Naoroji (4 September 1825 – 30 June 1917), known as the Grand Old Man of India, was a Parsi intellectual, educator, cotton trader, and an early Indian political and social leader. He was a Liberal Party member of parliament (MP) in the United Kingdom House of Commons between 1892 and 1895, and the first Asian to be a British MP, nonwithstanding the Anglo-Indian MP David Ochterlony Dyce Sombre who was disfranchised for corruption. Naoroji is also credited with the founding of the Indian National Congress, along with A.O. Hume and Dinshaw Edulji Wacha. His book Poverty and Un-British Rule in India brought attention to the draining of India's wealth into Britain. He was also member of the Second International along with Kautsky and Plekhanov. 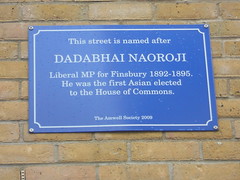 This street is named after Dadabhai Naoroji Liberal MP for Finsbury 1892-1895. He was the first Asian elected to the House of Commons.

Naoroji Street, Islington, London, United Kingdom where they was