Freddie Mercury (born Farrokh Bulsara; 5 September 1946 – 24 November 1991) was a British singer, songwriter and record producer, known as the lead vocalist and co-principal songwriter of the rock band Queen. He also became known for his flamboyant stage persona and four-octave vocal range. Mercury wrote and composed numerous hits for Queen (including "Bohemian Rhapsody," "Killer Queen," "Somebody to Love," "Don't Stop Me Now," "Crazy Little Thing Called Love," and "We Are the Champions"); occasionally served as a producer and guest musician (piano or vocals) for other artists; and concurrently led a solo career while performing with Queen. Mercury was born of Parsi descent in the Sultanate of Zanzibar and grew up there and in India until his mid-teens, before moving with his family to Middlesex, England — ultimately forming the band Queen in 1970 with Brian May and Roger Taylor. Mercury died in 1991 at age 45 due to complications from AIDS, having acknowledged the day before his death that he had contracted the disease. In 1992 Mercury was posthumously awarded the Brit Award for Outstanding Contribution to British Music, with a tribute concert held at Wembley Stadium, London. As a member of Queen, he was inducted into the Rock and Roll Hall of Fame in 2001, the Songwriters Hall of Fame in 2003, the UK Music Hall of Fame in 2004, and the band received a star on the Hollywood Walk of Fame in 2002. In 2002, he was placed at number 58 in the BBC's poll of the 100 Greatest Britons. Consistently voted one of the greatest singers in the history of popular music, Mercury was voted best male singer of all time in a 2005 poll organised by Blender and MTV2; was ranked at 18 on the 2008 Rolling Stone list of the 100 greatest singers ever; was elected in 2009 as the best rock singer of all time by Classic Rock; — and was described by AllMusic as "one of rock's greatest all-time entertainers," with "one of the greatest voices in all of music." 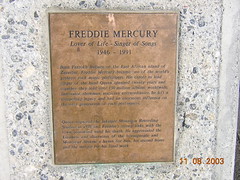 Freddie Mercury lover of life - singer of songs 1946-1991. Born Farrokh Bulsara on the East African island of Zanzibar, Freddie Mercury became one of the world's greatest rock music performers. His career as lead singer of the band Queen spanned twenty years and together they sold over 150 million albums worldwide. Innovator, showman, musician extraordinaire, he left a compelling legacy and had an enormous influence on the next generation of rock performers. Queen acquired the lakeside Mountain Recording Studios in 1978 and Freddie's strong links with the town continued until his death. He appreciated the kindness and discretion of the townspeople and Montreux became a haven for him, his second home and the setting for his final work.

Quai de la Rouvenaz, Montreux, Switzerland where they was