woman, Justice of the Peace, political campaigner, and politician

Elizabeth Margaret Braddock (née Bamber; 24 September 1899 – 13 November 1970) was a British Labour Party politician who served as Member of Parliament (MP) for the Liverpool Exchange division from 1945 to 1970. She was a member of Liverpool County Borough Council from 1930 to 1961. Although she never held office in government, she won a national reputation for her forthright campaigns in connection with housing, public health and other social issues. Braddock inherited much of her campaigning spirit from her mother, Mary Bamber, an early socialist and trade union activist. After some years in the Independent Labour Party (ILP), Braddock joined the Communist Party of Great Britain (CPGB) on its foundation in 1920, but quickly became disillusioned with the party's dictatorial tendencies. She left the CPGB in 1924 and later joined the Labour Party. Before the Second World War, alongside her husband Jack Braddock she established a reputation as a crusading left-wing councillor, frequently at odds with her party while pursuing an agenda of social reform. During the war she worked in Liverpool's ambulance service, before winning the Exchange division for Labour in the 1945 general election. With her formidable physique and outspoken manner, Braddock was a pugnacious presence in parliament, and a keen supporter of the 1945–51 Attlee ministry's reform agenda, particularly the establishment of the National Health Service in 1948. She served on Labour's National Executive Committee between 1947 and 1969. Her combative style led to a brief suspension from parliament in 1952. For most of her parliamentary career she remained a member of Liverpool's council, and was a central figure in the controversy that arose in the 1950s over the city's decision to acquire and flood the Tryweryn Valley in Wales for the construction of a reservoir. Between 1953 and 1957 Braddock served on the Royal Commission for Mental Health which led to the Mental Health Act 1959. From the early 1950s she moved steadily to the right wing of her party, and was increasingly acerbic in her judgements of her former colleagues on the left. When Labour won the 1964 general election she refused office on the grounds of age and health; thereafter her parliamentary contributions dwindled as her health worsened. Towards the end of her life she became Liverpool's first woman freeman. After her death in 1970 her Guardian obituarist hailed her as "one of the most distinctive political personalities of the century". 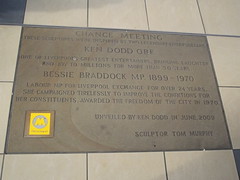 "Chance Meeting" These sculptures were inspired by two legendary Liverpudlians. Ken Dodd O.B.E. One of Liverpool's greatest entertainers, bringing laughter and joy to millions for more than 50 years. Bessie Braddock MP. 1899 - 1970. Labour MP for Liverpool Exchange for over 24 years. She campaigned tirelessly to improve the conditions for her constituents. Awarded the Freedom of the City in 1970. Unveiled by Ken Dodd in June 2009. Sculptor Tom Murphy