William Turton (21 May 1762 – 28 December 1835) was an English naturalist. Turton was born at Olveston, Gloucestershire and was educated at Oriel College, Oxford. He commenced in practice at Swansea, but devoted his leisure time to natural history, especially conchology. He published several illustrated shell books, and a translation of Gmelin's edition of Linnaeus' Systema Naturae in 1806. Turton died at Bideford. His shell collection is now located at the Smithsonian Institution. The bivalve genus Turtonia and the species Galeomma turtoni was named for him. 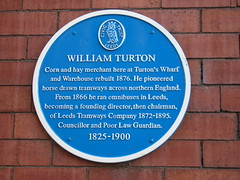 64, The Calls, Leeds, United Kingdom where they was a corn and hay merchant