Sir John Barran, 1st Baronet (3 August 1821 – 3 May 1905) was a British clothing manufacturer and Liberal Party politician. Barran was the son of John Barran and his wife Elizabeth (née Fletcher), and founded the firm of John Barran and Sons, clothing manufacturers, of Leeds. He was a Justice of the Peace for Leeds and the West Riding of Yorkshire and served as Mayor of Leeds from 1870 to 1871. In 1876 he was returned to Parliament as one of three representatives for Leeds, a seat he held until 1885, and later sat for Otley from 1886 to 1895. The latter year he was created a baronet, of Chapel Allerton Hall in Chapel Allerton in the West Riding of the County of York and Queen's Gate, St Mary Abbots parish, in Kensington in the County of London. Barran married Ann Hirst (died 1874) in 1842. He married Eliza Bilton, née Brown, in 1878. He had six sons and four daughters. His youngest son Rowland also became a Member of Parliament. Barran died in May 1905, aged 83, and was succeeded in the baronetcy by his grandson John, his eldest son John Barran having predeceased him. 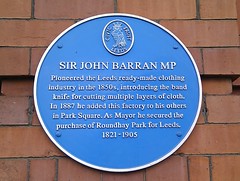 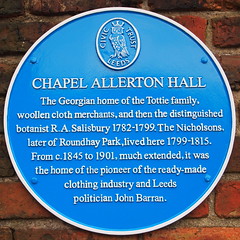 Sir John Barran MP Pioneered the Leeds ready-made clothing industry in the 1850s, introducing the band knife for cutting multiple layers of cloth. In 1887 he added this factory to his others in Park Square. As Mayor he secured the purchase of Roundhay Park for Leeds. 1821-1905

St. Paul's House This building was originally a warehouse and cloth-cutting works built for John Barran, the founder of the mass-production, ready-made clothing industry in Leeds. Barran was a Mayor of Leeds and served as its Liberal M.P. from 1876 - 1885 Architect: Thomas Ambler Erected 1878

Chapel Allerton Hall. The Georgian home of the Tottie family, woollen cloth merchants, and then distinguished botanist R. A. Salisbury 1782-1799. The Nicholsons, later of Roundhay Park, lived here 1799-1815. From c.1845 to 1901, much extended, it was the home of the pioneer ready-made clothing industry and Leeds politician John Barran.