Sir James Brooke, Rajah of Sarawak KCB (29 April 1803 – 11 June 1868), was a British soldier and adventurer who founded the Raj of Sarawak in Borneo. He ruled as the first White Rajah of Sarawak from 1841 until his death in 1868. Brooke was born and raised under the Company Raj of the British East India Company in India. After a few years of education in England, he served in the Bengal Army, was wounded, and resigned his commission. He then bought a ship and sailed out to the Malay Archipelago where, by helping to crush a rebellion, he became governor of Sarawak. He then vigorously suppressed piracy in the region and, in the ensuing turmoil, restored the Sultan of Brunei to his throne, for which the Sultan made Brooke the Rajah of Sarawak. He ruled until his death. Brooke was not without detractors and was criticised in the British Parliament and officially investigated in Singapore for his anti-piracy measures. He was, however, honoured and feted in London for his activities in Southeast Asia. The naturalist Alfred Russel Wallace was one of many visitors whose published work spoke of his hospitality and achievements. 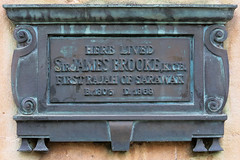 1 Widcombe Crescent, Bath, United Kingdom where they was