William Thomas Beckford (29 September 1760 – 2 May 1844) was an English novelist. He was also an art collector, a patron of decorative art, a critic, a travel writer, a plantation owner and for some time a politician. He was reputed at one stage to be the richest commoner in England. The son of William Beckford and Maria Hamilton, daughter of the Hon. George Hamilton, he served as a Member of Parliament for Wells in 1784–1790 and Hindon in 1790–1795 and 1806–1820. He is remembered for the Gothic novel Vathek (1786), for building the lost Fonthill Abbey in Wiltshire and Lansdown Tower ("Beckford's Tower") in Bath, and above all for his art collection. 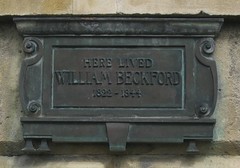 20 Lansdown Crescent, Bath, United Kingdom where they was