Michael Latham Powell (30 September 1905 – 19 February 1990) was an English filmmaker, celebrated for his partnership with Emeric Pressburger. Through their production company The Archers, they together wrote, produced and directed a series of classic British films, notably The Life and Death of Colonel Blimp (1943), A Canterbury Tale (1944), I Know Where I'm Going! (1945), A Matter of Life and Death (1946, also called Stairway to Heaven), Black Narcissus (1947), The Red Shoes (1948), and The Tales of Hoffmann (1951). His later controversial 1960 film Peeping Tom, while today considered a classic, and a contender as the first "slasher", was so vilified on first release that his career was seriously damaged. Many filmmakers such as Martin Scorsese, Francis Ford Coppola and George A. Romero have cited Powell as an influence. In 1981, he received the BAFTA Academy Fellowship Award along with his partner Pressburger, the highest honour the British Film Academy can give a filmmaker. He has been played on screen by Alastair Thomson Mills in the short film Òran na h-Eala (2022) which explores Moira Shearer's life changing decision to appear in The Red Shoes. 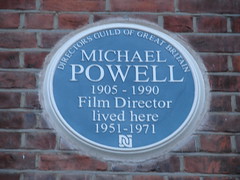