George Canning FRS (11 April 1770 – 8 August 1827) was a British Tory statesman. He held various senior cabinet positions under numerous prime ministers, including two important terms as Foreign Secretary, finally becoming Prime Minister of the United Kingdom for the last 118 days of his life, from April to August 1827. The son of an actress and a failed businessman and lawyer, Canning was supported financially by his uncle, Stratford Canning, which allowed him to attend Eton College and Christ Church, Oxford. Canning entered politics in 1793 and rose rapidly. He was Paymaster of the Forces (1800–1801) and Treasurer of the Navy (1804–1806) under William Pitt the Younger. Canning was Foreign Secretary (1807–1809) under the Duke of Portland. Canning was the dominant figure in the cabinet and directed the seizure of the Danish fleet in 1807 to assure Britain's naval supremacy over Napoleon. In 1809, he was wounded in a duel with his rival Lord Castlereagh and was shortly thereafter passed over as a successor to the Duke of Portland in favour of Spencer Perceval. He rejected overtures to serve as Foreign Secretary again because of Castlereagh's presence in Perceval's Cabinet, and he remained out of high office until after Perceval was assassinated in 1812. Canning subsequently served under the new Prime Minister the Earl of Liverpool as British Ambassador to Portugal (1814–1816), President of the Board of Control (1816–1821) and Foreign Secretary and Leader of the House of Commons (1822–1827). King George IV disliked Canning, and there were efforts to frustrate his foreign policies. Canning, however, successfully built wide public support for his policies. The historian Paul Hayes argues that he scored major achievements in diplomatic relations regarding Spain and Portugal, by helping to guarantee the independence of the American colonies of Portugal and Spain. His policies ensured a major trading advantage to British merchants and supported the Americans' Monroe Doctrine. The historian G. M. Trevelyan stated: For five years England had been guided by the genius of Canning, and seldom have so much brilliancy in so much wisdom combined to produce such happy results. The constitutional medium through which that genius worked was the loyal friendship of the prime minister, Lord Liverpool. When Lord Liverpool resigned in April 1827, Canning was chosen to succeed him as Prime Minister, ahead of the Duke of Wellington and Sir Robert Peel. Both of them declined to serve under Canning, and the Tories split between Peel and Wellington's Ultra-Tories and the Canningites. Canning then invited several Whigs to join his cabinet. However, his health collapsed, and he died in office in August 1827, after just 119 days in office, the shortest tenure ever of any British Prime Minister. 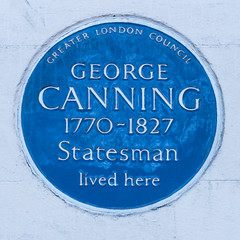 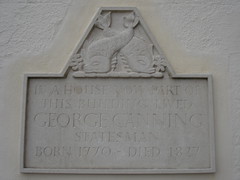 Seaford House. George Canning 1720-1827 MP for Seaford Prime Minister stayed in a house on this site