composer and Knight Bachelor (from 1871)

Sir William Sterndale Bennett (13 April 1816 – 1 February 1875) was an English composer, pianist, conductor and music educator. At the age of ten Bennett was admitted to the London Royal Academy of Music (RAM), where he remained for ten years. By the age of twenty, he had begun to make a reputation as a concert pianist, and his compositions received high praise. Among those impressed by Bennett was the German composer Felix Mendelssohn, who invited him to Leipzig. There Bennett became friendly with Robert Schumann, who shared Mendelssohn's admiration for his compositions. Bennett spent three winters composing and performing in Leipzig. In 1837 Bennett began to teach at the RAM, with which he was associated for most of the rest of his life. For twenty years he taught there, later also teaching at Queen's College, London. Amongst his pupils during this period were Arthur Sullivan, Hubert Parry, and Tobias Matthay. Throughout the 1840s and 1850s he composed little, although he performed as a pianist and directed the Philharmonic Society for ten years. He also actively promoted concerts of chamber music. From 1848 onwards his career was punctuated by antagonism between himself and the conductor Michael Costa. In 1858 Bennett returned to composition, but his later works, though popular, were considered old-fashioned and did not arouse as much critical enthusiasm as his youthful compositions had done. He was Professor of Music at the University of Cambridge from 1856 until 1875. In 1866 he became Principal of the RAM, rescuing it from closure, and remained in this position until his death. He was knighted in 1871. He died in London in 1875 and was buried in Westminster Abbey. Bennett had a significant influence on English music, not solely as a composer but also as a teacher, as a promoter of standards of musical education and as an important figure in London concert life. In recent years, appreciation of Bennett's compositions has been rekindled and a number of his works, including a symphony, his piano concerti, some vocal music and many of his piano compositions, have been recorded. In his bicentenary year of 2016, several concerts of his music and other related events took place. 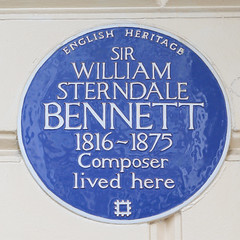