Dawn Powell (Nov. 28, 1896 – Nov. 14, 1965) was an award-winning novelist, playwright, screenwriter, and short story writer. Known for her acid-tongued prose, "her relative obscurity was likely due to a general distaste for her harsh satiric tone." Nonetheless, Stella Adler and author Clifford Odets appeared in one of her plays. Her work was praised by Robert Benchley in the New Yorker and, in 1939, she was signed as a Scribner author where Maxwell Perkins, famous for his work with many of her contemporaries, including Hemingway, Fitzgerald and Thomas Wolfe, became her editor. A 1963 nominee for the National Book Award, she received an American Academy of Arts and Letters Marjorie Peabody Waite Award for lifetime achievement in literature the following year. Friend to many literary and arts figures of her day, including author John Dos Passos, critic Edmund Wilson, and poet E.E. Cummings, her work received renewed interest after Gore Vidal praised it in an 1987 editorial for The New York Review of Books. Since then, the Library of America has published two collections of her novels. 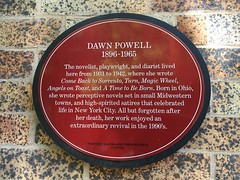 Dawn Powell 1896-1965 The novelist, playwright, and diarist lived here from 1931-1942, where she wrote Come Back to Sorrento, Turn, Magic Wheel, Angels on Toast, and A Time to Be Born. Born in Ohio, she wrote perceptive novels set in small Midwestern towns, and high-spirited satires that celebrated life in New York City. All but forgotten after her death, her work enjoyed an extraordinary revival in the 1990's.