Jesse Boot, 1st Baron Trent (2 June 1850 – 13 June 1931) transformed The Boots Company, founded by his father, John Boot, into a national retailer, which branded itself as "Chemists to the Nation", before he sold his controlling interest to American investors in 1920. John Boot offered his close friend and business associate John Harston, the opportunity of going into business with him, but Barrett declined, feeling the venture was not worth investing in. Boot was a great benefactor to the City of Nottingham. He donated land for the new University College at Highfields, now the University of Nottingham, which opened in 1928 and was presented with the Freedom of the City of Nottingham in 1920. He was also a significant benefactor to his wife's home, Jersey. Boot was knighted in 1909, created a baronet in 1917, and announced in the New Year's Honours of 1929 was elevated to the peerage, and created Baron Trent, of Nottingham in the County of Nottingham on 18 March 1929. These latter honours probably owed as much to his solid support of the Liberal Party as to his philanthropy to the city of his birth. He died in Jersey in 1931. The Sir Jesse Boot Chair in Chemistry at the University of Nottingham was named in his honour. His widow commissioned the French glass artist René Lalique to refit the church of St Matthew, Millbrook (popularly known as the "Glass Church") as a memorial to him. In 1934 a Primary school was built in Bakersfield in Sir Jesse Boot's memory named "Jesse Boot Primary School". Jesse Boot Primary School was closed in 2009 and was replaced under the name "Nottingham Academy" which connected to "Greenwood secondary school" and others. The building was destroyed the following year. His portrait, by Noel Denholm Davis, is in the collection of the University of Nottingham. Another, by the same artist, is on loan to the National Portrait Gallery. 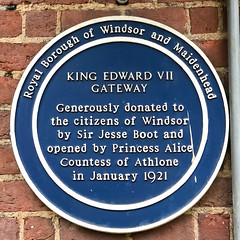 King Edward VII Gateway. Generously donated to the citizens of Windsor by Sir Jesse Boot and opened by Princess Alice Countess of Athlone in January 1921