Richard Coates (born 16 April 1949, in Grimsby, Lincolnshire, and educated at Wintringham School) is an English linguist. He was professor of linguistics (alternatively professor of onomastics) at the University of the West of England, Bristol, now emeritus. From 1977 to 2006 he taught at the University of Sussex, where he served as professor of linguistics (1991–2006) and as Dean of the School of Cognitive and Computing Sciences (1998–2003). From 1980–9 he was assistant secretary and then secretary of the Linguistics Association of Great Britain. He was honorary director of the from 2003 to 2019, having previously (1997–2002) served as president of the English Place-Name Society which conducts the Survey, resuming this role in 2019. From 2002 to 2008, he was secretary of the International Council of Onomastic Sciences, a body devoted to the promotion of the study of names, and elected as one of its two vice-presidents from 2011–17. He was elected a fellow of the Society of Antiquaries in 1992 and of the Royal Society of Arts in 2001. His main academic interests are proper names (both from the historical and the theoretical perspective), historical linguistics in general, the philology of the Germanic, Romance and Celtic languages, regional variation in language, and local history. He is editor of the Survey of English Place-Names for Hampshire and was principal investigator of the AHRC-funded project Family Names of the United Kingdom (FaNUK), running from 2010–16, of which Patrick Hanks was lead researcher. He has written books on the names of the Channel Islands, the local place-names of St Kilda, Hampshire and Sussex, the dialect of Sussex, and, with Andrew Breeze, on Celtic place-names in England, as well as over 500 academic articles, notes, and collections on related topics. His main contribution to linguistic theory is The Pragmatic Theory of Properhood, set out in a number of articles since 2000. He is also the author of Word Structure, a students' introduction to linguistic morphology (Routledge), and of online resources on Shakespeare's character-names and on the place-names of Hayling Island. 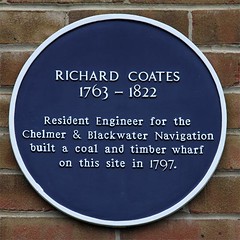 Richard Coates 1763-1822 Resident Engineer for the Chelmer and Blackwater Navigation built a coal and timber wharf on this site in 1797.

Wharf Road, Chelmsford, United Kingdom where they built a coal and timber wharf