Thomas Fenwick Drayton (August 24, 1809 – February 18, 1891) was a planter, politician, railroad president, and military officer from Charleston, South Carolina. He served in the United States Army and then as a brigadier general in the Confederate States Army during the American Civil War. His brother, Percival Drayton, was a Naval Officer and fought on the Union side during the war. 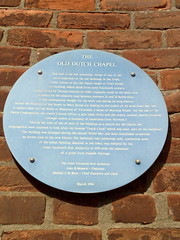 The Old Dutch Chapel This wall is the last remaining vestige of one of the most important of the old buildings in the Town, locally known as the Old Dutch chapel or Town House. The building, which dates from early fourteenth century (once owned by Thomas Drayton in 1358), originally stood in the space now occupied by the adjacent road between numbers 21 and 23 South Quay. It was subsequently bought for the town and during it's long history, served the function of the Staple or Mart House for dealing with the export of all wool from the Port, a concert base for the Waits or Musicians of Yarmouth, a house of Morning Prayer for the use of the Dutch Congregation, the town's Custom Office, a port dues office and the town's earliest theatre (housing amongst others, a company of comedians from Norwich.) During the time of use of part of the building as a church for the Dutch, the congregation were required to look after the famous "Dutch Clock" which was once part of the building) The building was damaged during the Second World War and later demolished to provide an access road to the new library. The building's last remaing wall, containing some of the oldest building material in the town, was restored by the Great Yarmouth Port Authority in 1993 with the assistance of a grant from English Heritage.