Charles Stanhope, 3rd Earl Stanhope, aka Charles Mahon, 3rd Earl Stanhope, FRS (3 August 1753 – 15 December 1816), was a British statesman and scientist. He was the father of the great traveller and Arabist Lady Hester Stanhope and brother-in-law of William Pitt the Younger. He is sometimes confused with an exact contemporary of his, Charles Stanhope, 3rd Earl of Harrington. His lean and awkward figure was extensively caricatured by James Sayers and James Gillray, reflecting his political opinions and his relationship with his children. 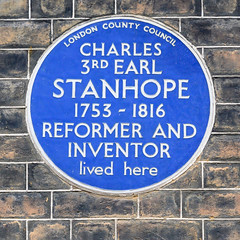