Malus domestica (Bramley's Seedling, commonly known as the Bramley apple, or simply Bramley, Bramleys or Bramley's) is a cultivar of apple that is usually eaten cooked due to its sourness. The variety comes from a pip planted by Mary Ann Brailsford. The Concise Household Encyclopedia states, "Some people eat this apple raw in order to cleanse the palate, but Bramley's seedling is essentially the fruit for tart, pie, or dumpling." Once cooked, however, it has a lighter flavour. A peculiarity of the variety is that when cooked it becomes golden and fluffy.Vitamin C 15mg/100g. 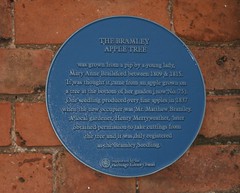 The Bramley Apple Tree was grown from a pip by a young lady, Mary Anne Brailsford between 1809 & 1815. It was thought it came from an apple grown on a tree at the bottom of her garden (now No. 75). One seedling produced very fine apples in 1837 when the new occupier was Mr. Matthew Bramley. A local gardener, Henry Merryweather, later obtained permission to take cuttings from the tree and it was duly registered as the Bramley Seedling.

75 Church St, Southwell, United Kingdom where they grew the Bramley Apple Tree from a pip