John Arbuthnot Fisher, 1st Baron Fisher, GCB, OM, GCVO (25 January 1841 – 10 July 1920), commonly known as Jacky or Jackie Fisher, was a British Admiral of the Fleet. In nearly seventy years in the Royal Navy, his efforts to reform the service helped to usher in an era of modernisation which saw the supersession of wooden sailing ships armed with muzzle-loading cannon by steel-hulled battlecruisers, submarines and the first aircraft carriers. Fisher has a reputation as an innovator, strategist and developer of the navy rather than as a seagoing admiral involved in major battles, although in his career he experienced all these things. When appointed First Sea Lord in 1904 he removed 150 ships then on active service which were no longer useful and set about constructing modern replacements, developing a modern fleet prepared to meet Germany during the First World War. Fisher saw the need to improve the range, accuracy and rate-of-fire of naval gunnery, and became an early proponent of the use of the torpedo, which he believed would supersede big guns for use against ships. As Controller, he introduced torpedo-boat destroyers as a class of ship intended for defence against attack from torpedo boats or from submarines. As First Sea Lord he drove the construction of HMS Dreadnought, the first all-big-gun battleship, but he also believed that submarines would become increasingly important and urged their development. He became involved with the introduction of turbine engines to replace reciprocating engines, and with the introduction of oil fuelling to replace coal. He introduced daily baked bread on board ships, whereas when he entered the service it was customary to eat hard biscuits, frequently infested by biscuit beetles. He first officially retired from the Admiralty in 1910 on his 69th birthday, but became First Sea Lord again in November 1914. He resigned seven months later in frustration over Churchill's Gallipoli campaign, and then served as chairman of the Government's Board of Invention and Research until the end of the war. 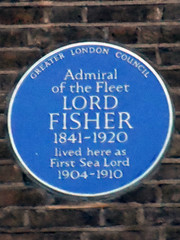