The London Palladium () is a 2,286-seat Grade II* West End theatre located on Argyll Street, London, in the famous area of Soho. Of the roster of stars who have played there, many have televised performances. While the theatre has a resident show, it is also able to host one off performances, such as concerts and TV specials. It has hosted the Royal Variety Performance 43 times, most recently in 2019. 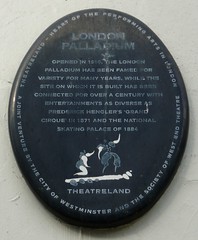 London Palladium Opened in 1910, the London Palladium has been famed for variety for many years, while the site on which it is built has been connected for over a century with entertainments as diverse as Frederick Hengler's "Grand Cirque" in 1871 and the National Skating Palace of 1884