The London Pavilion is a building on the corner of Shaftesbury Avenue and Coventry Street on the north-east side of Piccadilly Circus in London. It is currently a shopping arcade and part of the Trocadero Centre. 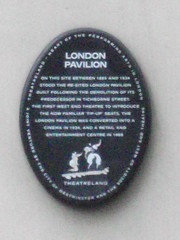 London Pavilion On this site between 1885 and 1934 stood the re-sited London Pavilion built following the demolition of its predecessor in Tichborne Street. The first West End theatre to introduce the now familiar "tip-up" seats, the London Pavilion was converted into a cinema in 1934, and a retail and entertainment centre in 1988