Anton Bruckner (German: [ˈantɔn ˈbʀʊknɐ] ; 4 September 1824 – 11 October 1896) was an Austrian composer known for his symphonies, masses, and motets. The first are considered emblematic of the final stage of Austro-German Romanticism because of their rich harmonic language, strongly polyphonic character, and considerable length. Bruckner's compositions helped to define contemporary musical radicalism, owing to their dissonances, unprepared modulations, and roving harmonies. Unlike other musical radicals such as Richard Wagner and Hugo Wolf who fit the enfant terrible mould, Bruckner showed extreme humility before other musicians, Wagner in particular. This apparent dichotomy between Bruckner the man and Bruckner the composer hampers efforts to describe his life in a way that gives a straightforward context for his music. His works, the symphonies in particular, had detractors, most notably the influential Austrian critic Eduard Hanslick, and other supporters of Johannes Brahms who pointed to their large size and use of repetition, as well as to Bruckner's propensity for revising many of his works, often with the assistance of colleagues, and his apparent indecision about which versions he preferred. On the other hand, Bruckner was greatly admired by subsequent composers including his friend Gustav Mahler, who described him as "half simpleton, half God". 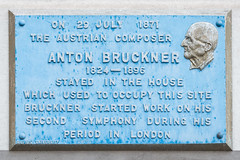 39-45 Finsbury Square, EC2, London, United Kingdom where they was