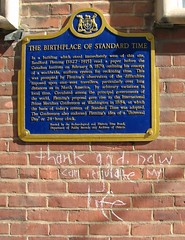 The Birthplace of Standard Time In a building which stood immediately west of this site, Sandford Fleming (1827-1915) read a paper before the Canadian Institute on February 8, 1879, outlining his concept of a worldwide, uniform system for reckoning time. This was prompted by Fleming's observation of the difficulties imposed upon east-west travellers, particularly over long distances as in North America, by arbitrary variations in local time. Circulated among the principal governments of the world, Fleming's proposal gave rise to the International Prime Meridian Conference at Washington in 1884, at which the basis of today's system of Standard Time was adopted. The Conference also endorsed Fleming's idea of a "Universal Day" or 24-hour clock.

in front of the parking garage of the building on the east side of Berti Street just north of Richmond Street East, Toronto, ON, Canada where it was born (1879)