Short Brothers plc, usually referred to as Shorts or Short, is an aerospace company based in Belfast, Northern Ireland. Shorts was founded in 1908 in London, and was the first company in the world to make production aircraft. It was particularly notable for its flying boat designs manufactured into the 1950s. In 1943 Shorts was nationalised and later denationalised, and in 1948 moved from its main base at Rochester, Kent to Belfast. In the 1960s, Shorts mainly produced turboprop airliners, major components for aerospace primary manufacturers, and missiles for the British Armed Forces. In 1989 Shorts was bought by Bombardier, and is today the largest manufacturing concern in Northern Ireland. The company's products include aircraft components, engine nacelles and aircraft flight control systems for its parent company Bombardier Aerospace, and for Boeing, Rolls-Royce Deutschland, General Electric and Pratt & Whitney. 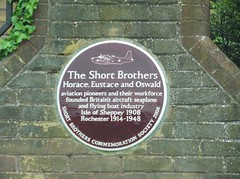