Olave St Clair Baden-Powell, Baroness Baden-Powell, GBE (22 February 1889 – 25 June 1977) was born Olave St Clair Soames in Chesterfield, England. After the death of her husband, she was known as Olave, Lady Baden-Powell, or The Dowager Lady Baden-Powell. She outlived her husband, Robert Baden-Powell (22 Feb 1857 – 8 Jan 1941), the founder of Scouting and Girl Guides, by over 35 years. He was 32 years older than her. Olave became Chief Guide for Britain in 1918. Later the same year, at the Swanwick conference for Commissioners in October, she was presented with a gold Silver Fish, one of only two ever made. She was elected World Chief Guide in 1930. As well as making a major contribution to the development of the Guide / Girl Scout movements, she visited 111 countries during her life, attending Jamborees and national Guide and Scout associations. 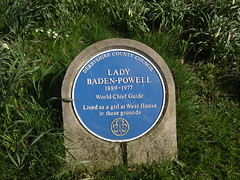