Herbert Henry Asquith, 1st Earl of Oxford and Asquith, KG, PC, KC (12 September 1852 – 15 February 1928), generally known as H. H. Asquith, served as the Liberal Prime Minister of the United Kingdom from 1908 to 1916, the last to lead that party in government without a coalition. Asquith took his nation into the First World War, but resigned amid political conflict in December 1916 and David Lloyd George became prime minister. Asquith was born in the West Riding of Yorkshire. His father owned a small establishment in the woollen trade, but died when his son was age 7, and after a brief stay with an uncle, the young Asquith spent the remainder of his childhood at boarding school and lodged with families not his own. He was educated at City of London School and Balliol College, Oxford. He trained as a barrister at Lincoln's Inn, but after being called to the bar, received few briefs in his early years. Thereafter he gained prominence for his legal skills. In 1886, he was adopted as Liberal candidate for East Fife, a seat he held over thirty years. In 1892, he was appointed as Home Secretary in Gladstone's fourth ministry, remaining in the post until the Liberals lost the 1895 election. In the decade of opposition that followed, Asquith became a major figure in the party, and when the Liberals regained power under Sir Henry Campbell-Bannerman in 1905, Asquith was named as Chancellor of the Exchequer. In 1908, when the dying Campbell-Bannerman resigned, Asquith succeeded him as prime minister, with Lloyd George as chancellor . With their first majority government since the 1880s, the Liberals were determined to advance their agenda. An impediment to this was the unelected House of Lords, dominated by the Conservatives. When Lloyd George proposed, and the House of Commons passed, the People's Budget of 1909, the Lords rejected it. Asquith called an election for January 1910, and the Liberals won, though only with a minority government. Although the Lords then passed the budget, Asquith was determined to reform the upper house, and after another general election in December 1910 gained passage of the Parliament Act 1911, allowing a bill three times passed by the Commons in consecutive sessions to be enacted regardless of the Lords. Asquith was less successful in dealing with Irish Home Rule; repeated crises led to gun running and violence, a pattern that continued past the start of the First World War in 1914. Asquith's action in taking the country to war has been described as the most important individual prime ministerial decision of the nineteenth and twentieth centuries, and he did it with Britain united. Historians have also acknowledged the contribution to Britain's ultimate success made by some his early decisions on national mobilisation; the despatch of the British Expeditionary Force, the creation of a mass army, and the development of an industrial strategy designed to support the country's war aims. But Asquith's technique of acting as mediator among talented cabinet members such as Lloyd George and Winston Churchill was less effective in war than in peace, and difficulties with the war effort led him to form a coalition government with the Conservatives early in 1915. Continued crises, over conscription, the Irish Home Rule movement, and as a result of military failures, shook the confidence of MPs in him, and when conflict with Lloyd George erupted in December 1916, Asquith could not keep their support, and he resigned. Asquith remained as leader of the Liberal Party, but the internal conflict, both during and after the war, helped demolish the party's electoral prospects as Labour continued its rise to be the party of the left. Asquith accepted a peerage after his final parliamentary campaign (in 1924) ended in defeat; he died in 1928. His role, both in the First World War and in the fall of the Liberal Party, remains controversial. 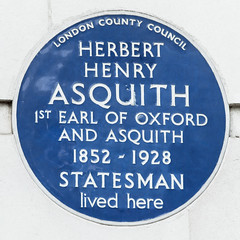