St Paul's School is a selective independent school for boys aged 13–18, founded in 1509 by John Colet and located on a 43-acre site by the Thames in London. St Paul's is one of the nine original English public schools investigated by the Clarendon Commission, which subsequently became known as the Clarendon schools. However, the school successfully argued that it was a private school and consequently was omitted from the Public Schools Act 1868, as was Merchant Taylors', the other day school within the scope of Lord Clarendon's terms of reference. Since 1881, St Paul's has had its own preparatory school, St Paul's Juniors (formerly Colet Court), which since 1968 has been located on the same site. St Paul's has been ranked the leading boys' school in the country academically, maintaining high average GCSE and A-Level results, and one of the highest Oxbridge acceptance rates of any secondary school or college. The school is currently being rebuilt and expanded as part of an extensive project beginning in 2011, and set to last thirty years. 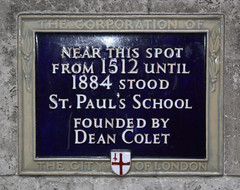 St Paul's School This house with attached lodge was built for the High Master of St Paul's when the school - founded next to St Paul's Cathedral - moved to Hammersmith in 1884. The architect was Alfred Waterhouse. The main school buildings were demolished after the school moved again - to Barnes - in 1968.