William Beamont (1797–1889) was a Victorian solicitor and local philanthropist, living in the town of Warrington, in the north-west of England. He was the first mayor of Warrington after its incorporation as a municipal borough in 1847. As mayor, he founded its municipal library, the first rate-aided library in the UK, in 1848. He travelled extensively, including in the Holy Land, where he met William Holman Hunt. His diaries, stored in the town's main library, are a valuable source of social history. For many years he lived at Orford Hall. Beamont was a Member of the Chetham Society, and served as Member of Council (1849–82) and Vice-President (1879–82). A high school (Beamont Collegiate Academy) and a primary school in the town are named after him. William Beamont outlived his only son William John Beamont, who was a clergyman and author. His grave lies in the churchyard of Christ Church, Padgate, one of several Church of England churches that he helped found. 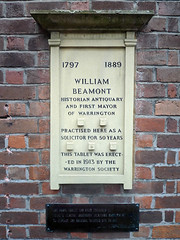