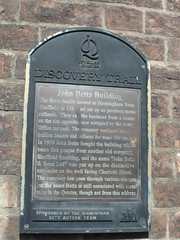 John Betts Building The Betts family moved to Birmingham from Sheffield in 1769 and set up as precious metal refiners. They ran the business from a house on the site opposite, now occupied by the Assay Office car park. The company continued as bullion dealers and refiners for some 200 years. In 1970 John Betts bought the building which bears this plaque from another old company, Sheffield Smelting, and the name "John Betts & Son Ltd" was put up on the distinctive cartouche on the wall facing Charlotte Street. The company has gone through various changes but the name Betts is still associated with metal sales in the Quarter, though not from this address.