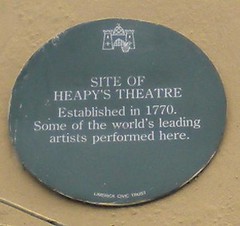 Site of Heapy's Theatre established in 1770. Some of the world's leading artists performed here. In 1781, the theatre was leased by Richard Daly, a former actor in Heaphy's company, and subsequently by Edward Jones. It burned down in 1818.