William Hazlitt (10 April 1778 – 18 September 1830) was an English essayist, drama and literary critic, painter, social commentator, and philosopher. He is now considered one of the greatest critics and essayists in the history of the English language, placed in the company of Samuel Johnson and George Orwell. He is also acknowledged as the finest art critic of his age. Despite his high standing among historians of literature and art, his work is currently little read and mostly out of print. During his lifetime he befriended many people who are now part of the 19th-century literary canon, including Charles and Mary Lamb, Stendhal, Samuel Taylor Coleridge, William Wordsworth, and John Keats. 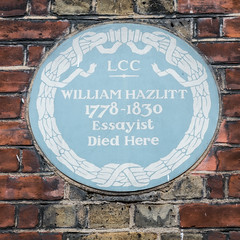 In a house on this site lived William Hazlitt 1829

High Street, Maidstone, United Kingdom where they was born near (1778)