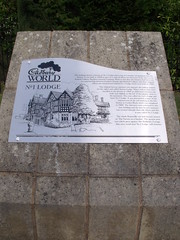 No 1 Lodge This building is known as No. 1 Lodge and is one of a number of entrances into the factory. It was built in 1889 as part of a suite of offices for directors of the then newly formed Cadbury Brothers Limited Company. Prior to this date the business had been run as a partnership between brothers George and Richard Cadbury and their original offices are situated just behind No. 1 Lodge which were built in 1880. The original factory entrance was opposite the railway station (to the right) and called Station Lodge. When railway lines were installed in the factory in 1884 an additional entrance was built, just slightly to the left of this plaque, close to the pavement. This was called the Girl's Lodge and later No. 1 Lodge. It was demolished as part of the construction of the tall building to the left, known as Linden Block which was completed in 1966. The directors were relocated to this new building and the new factory entrance was created through their old offices and this is now called No. 1 Lodge. The whole Bournville site has become known as 'The Factory in a Garden'. The ancient pear tree which grew against Mrs Duffield's Cottage, that once stood near No. 1 Lodge, still remains.