General John Burgoyne (24 February 1722 – 4 August 1792) was a British general, dramatist and politician who sat in the House of Commons from 1761 to 1792. He first saw action during the Seven Years' War when he participated in several battles, most notably during the Portugal Campaign of 1762. Burgoyne is best known for his role in the American Revolutionary War. He designed an invasion scheme and was appointed to command a force moving south from Canada to split away New England and end the rebellion. Burgoyne advanced from Canada but his slow movement allowed the Americans to concentrate their forces. Instead of coming to his aid according to the overall plan, the British Army in New York City moved south to capture Philadelphia. Burgoyne fought two small battles near Saratoga but was surrounded by American forces and, with no relief in sight, surrendered his entire army of 6,200 men on 17 October 1777. His surrender, says historian Edmund Morgan, "was a great turning point of the war, because it won for Americans the foreign assistance which was the last element needed for victory." France had been supplying the North American colonists since the spring of 1776. Burgoyne and his officers returned to England; the enlisted men became prisoners of war. Burgoyne came under sharp criticism when he returned to London, and never held another active command. Burgoyne was also an accomplished playwright, known for his works such as The Maid of the Oaks and The Heiress, but his plays never reached the fame of his military career. He served as a member of the House of Commons for many years, sitting for the seats of Midhurst and Preston. 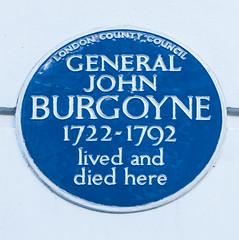