establisher of the atomic numbers of the chemical elements

Henry Gwyn Jeffreys Moseley (/ˈmoʊzli/; 23 November 1887 – 10 August 1915) was an English physicist, whose contribution to the science of physics was the justification from physical laws of the previous empirical and chemical concept of the atomic number. This stemmed from his development of Moseley's law in X-ray spectra. Moseley's law advanced atomic physics, nuclear physics and quantum physics by providing the first experimental evidence in favour of Niels Bohr's theory, aside from the hydrogen atom spectrum which the Bohr theory was designed to reproduce. That theory refined Ernest Rutherford's and Antonius van den Broek's model, which proposed that the atom contains in its nucleus a number of positive nuclear charges that is equal to its (atomic) number in the periodic table. This remains the accepted model today. When World War I broke out in Western Europe, Moseley left his research work at the University of Oxford behind to volunteer for the Royal Engineers of the British Army. Moseley was assigned to the force of British Empire soldiers that invaded the region of Gallipoli, Turkey, in April 1915, as a telecommunications officer. Moseley was shot and killed during the Battle of Gallipoli on 10 August 1915, at the age of 27. Experts have speculated that Moseley could otherwise have been awarded the Nobel Prize in Physics in 1916. 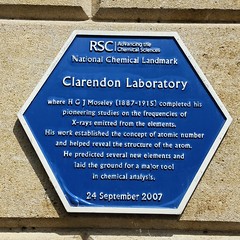 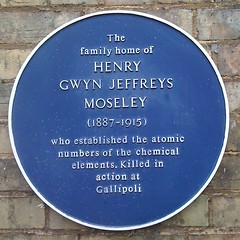 National Chemical Landmark: Clarendon Laboratory where H. G. J. Moseley (1887-1915) completed his pioneering studies on the frequencies of X-rays emitted from the elements. His work established the concept of atomic number and helped reveal the structure of the atom. He predicted several new elements and laid the ground for a major tool in chemical analysis.

Sherrington Road, Oxford, United Kingdom where they completed his pioneering studies on the frequencies of X-rays emitted from the elements

The family home of Henry Gwyn Jeffreys Moseley (1887-1915) who established the atomic numbers of the chemical elements. Killed in action at Gallipoli