Robert Milligan (19 August 1746 – 21 May 1809) was a prominent Scottish mercantile chamber member and slave-owner, and was the driving force behind the construction and initial statutory sectoral monopoly of the West India Docks in London. From 1768 to 1779 Milligan was a merchant in Kingston, Jamaica. He left Jamaica in 1779 to establish himself in London, where he got married and had a family of eight children. He moved to Hampstead shortly before he died in 1809. By the time of his death, one of Milligan's partnerships had interests in estates in Jamaica which owned 526 slaves in their sugar plantations. 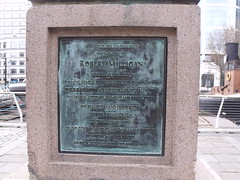 To perpetuate the memory of Robert Milligan a Merchant of London, to whose genius, perseverance and guardian care the surrounding great work principally owes it's design, accomplishment and regulation. The Directors and Proprietors, deprived by his death on the 21st May, 1809 on the continuance of his invaluable services, by their unanimous vote have caused this statue to be erected.

Back of the plinth below the Robert Milligan statue - West India Quay (outside the Museum of London Docklands), London, United Kingdom where they is commemorated