Sir James Drake CBE (27 July 1907 – 1 February 1989) was a chartered civil engineer who is regarded as the pioneer of the national motorway network in the United Kingdom. As the county surveyor and bridgemaster of Lancashire County Council from 1945 to 1972 he led teams that designed the first stretch of motorway opened to the public, the Preston By-pass (now the M6 from Junctions 29 to 32) on 5 December 1958. There then followed numerous contracts to extend the motorway in the north west of England, which, thanks to his role, probably still has the greatest density of motorways in the country. He was appointed a CBE in 1962 for his services as County Surveyor and Bridgemaster of Lancashire County Council and in 1973 he was knighted in recognition of his role as head of the North West Road Construction Unit and the Lancashire Sub-Unit, organisations that further extended his initial work. 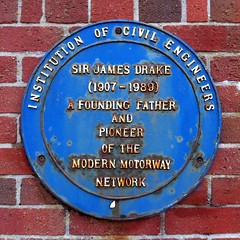 Promenade, Blackpool, United Kingdom where they was