Ordnance Survey (OS) is the national mapping agency for Great Britain. The agency's name indicates its original military purpose (see ordnance and surveying), which was to map Scotland in the wake of the Jacobite rising of 1745. There was also a more general and nationwide need in light of the potential threat of invasion during the Napoleonic Wars. Since 1 April 2015 Ordnance Survey has operated as Ordnance Survey Ltd, a government-owned company, 100% in public ownership. The Ordnance Survey Board remains accountable to the Secretary of State for Business, Energy and Industrial Strategy. It was also a member of the Public Data Group. Paper maps for walkers represent only 5% of OS' annual revenue. They produce digital map data, online route planning and sharing services and mobile apps, plus many other location-based products for business, government and consumers. Ordnance Survey mapping is usually classified as either "large-scale" (in other words, more detailed) or "small-scale". The Survey's large-scale mapping comprises 1:2,500 maps for urban areas and 1:10,000 more generally. (The latter superseded the 1:10,560 "six inches to the mile" scale in the 1950s.) These large scale maps are typically used in professional land-use contexts and were available as sheets until the 1980s, when they were digitised. Small-scale mapping for leisure use includes the 1:25,000 "Explorer" series, the 1:50,000 "Landranger" series and the 1:250,000 road maps. These are still available in traditional sheet form. Ordnance Survey maps remain in copyright for fifty years after their publication. Some of the Copyright Libraries hold complete or near-complete collections of pre-digital OS mapping. 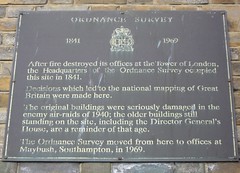 Ordnance Survey 1841 - 1969 After fire destroyed its offices at the Tower of London, the Headquarters of the Ordnance Survey occupied this site in 1841. Decisions which led to the national mapping of Great Britain were made here. The original buildings were seriously damaged in the enemy air-raids of 1940; the older buildings still standing on the site, including the Director General's House, are a reminder of that age. The Ordnance Survey moved from here to offices at Maybush, Southampton, in 1969.