Thomas Coleman Younger (January 15, 1844 – March 21, 1916) was an American Confederate guerrilla during the American Civil War and later an outlaw leader with the James–Younger Gang. He was the elder brother of Jim, John and Bob Younger, who were also members of the gang. 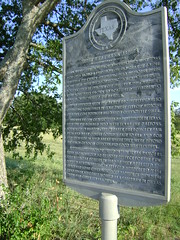 Jesse and Frank James famous western frontier outlaws, who had many Texas hideouts along a line from the Rio Grande to the Red River. The camps--extending into Missouri, their home state--were used for hiding stolen horses until posses could be thrown off the trail. The campsites were sometimes known to be scattered settlers, who feared or befriended the bandits. Also friendly with the James Brothers (and also operating sometimes in Texas) were fellow Missouri outlaws, Cole Younger and “Bandit Queen” Belle Starr. This was an era of widespread lawlessness in Texas. Billy the Kid roamed into West Texas. The Daltons, John Wesley Hardin, Cullen Baker, Bill Longley, Sam Bass, and many others found it easy to kill and rob and then hide in wild areas where they were beyond the reach of local officers, and food was plentiful. After Reconstruction ended in 1874, Texas Rangers were reorganized to restore respect for the law. Given special powers, in 1889-90 they arrested 579 wanted men (including 76 alleged murderers). Jesse James and some other notorious badmen by then were dead. Frank, reformed, worked as a salesman in Dallas, Paris, and other Texas towns.