Charles Eugène Jules Marie Nungesser, MC (15 March 1892 – presumably on or after 8 May 1927) was a French ace pilot and adventurer, best remembered as a rival of Charles Lindbergh. Nungesser was a renowned ace in France, ranking third highest in the country with 43 air combat victories during World War I. After the war, Nungesser mysteriously disappeared on an attempt to make the first non-stop transatlantic flight from Paris to New York, flying with wartime comrade François Coli in L'Oiseau Blanc (The White Bird). Their aircraft took off from Paris on 8 May 1927, was sighted once more over Ireland, and then was never seen again. The disappearance of Nungesser is considered one of the great mysteries in the history of aviation, and modern speculation is that the aircraft was either lost over the Atlantic or crashed in Newfoundland or Maine. Two weeks after Nungesser and Coli's attempt, Charles Lindbergh successfully made the journey, flying solo from New York to Paris in Spirit of St. Louis. Monuments and museums honoring Nungesser and Coli's attempt exist at Le Bourget airport in Paris and on the cliffs of Étretat, the location from which their plane was last sighted in France. 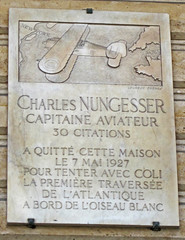 English translation: Charles Nungesser Captain Aviator 30 citations left this house on May 7, 1927 to attempt with Coli the first Atlantic transverse aboard the White Bird [AWS Translate]