Justice of the Peace and Colonel 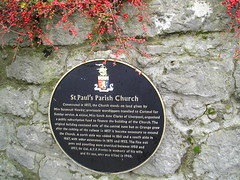 St Paul's Parish Church. Consecrated in 1853, the church stands on land given by Miss Suzannah Newby; previously worshippers travelled to Cartmel for Sunday service. A visitor, Miss Sarah Anne Clark of Liverpool, organised a public subscription fund to finance the building of the Church. The original building consisted only of the central nave but as Grange grew after the coming of the railway in 1857 it became necessary to extend the Church. A north aisle was added in 1861 and a south aisle in 1867, with other extensions in 1875 and 1932. The fine oak pews and panelling were provided between 1950 and 1953, by Col. ATP Porritt in memory of his wife and his son, who was killed in 1940.