Alfred Messel (22 July 1853 – 24 March 1909) was one of the most well-known German architect at the turning point to the 20th century, creating a new style for buildings which bridged the transition from historicism to modernism. Messel was able to combine the structure, decoration, and function of his buildings, which ranged from department stores, museums, office buildings, mansions, and social housing to soup kitchens, into a coherent, harmonious whole. As an urban architect striving for excellence he was in many respects ahead of his time. His most well known works, the Wertheim department stores and the Pergamon Museum in Berlin, reflect a new concept of self-confident metropolitan architecture. His architectural drawings and construction plans are preserved at the Architecture Museum of the Technical University of Berlin. 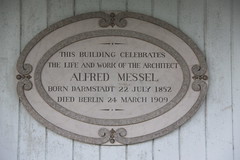