Michael Denzil Xavier Portillo (born 26 May 1953) is a British journalist, broadcaster and former politician. His broadcast series include railway documentaries such as Great British Railway Journeys and Great Continental Railway Journeys. A former member of the Conservative Party, he was Member of Parliament (MP) for Enfield Southgate from 1984 to 1997 and Kensington and Chelsea from 1999 to 2005. First elected to the House of Commons in a 1984 by-election, Portillo served as a junior minister under both Margaret Thatcher and John Major, before entering the Cabinet in 1992 as Chief Secretary to the Treasury, before being promoted to Secretary of State for Employment in 1994. A Thatcherite and a Eurosceptic, he was considered a "darling of the right" and was seen as a likely challenger to Major during the 1995 Conservative leadership election, but did not run, and was subsequently promoted to Secretary of State for Defence. As Defence Secretary, he pressed for a course of "clear blue water"; purist policies separating the Conservatives from the Labour Party. Portillo unexpectedly lost the hitherto safe Conservative Enfield Southgate seat at the 1997 general election. This led to the coining of the expression "Portillo moment". Returning to the Commons in the 1999 by-election in Kensington and Chelsea, Portillo rejoined the frontbench as Shadow Chancellor of the Exchequer. Standing for the leadership of the party in 2001, he finally came in third place behind Iain Duncan Smith and Kenneth Clarke. He retired from the House of Commons and from active politics at the 2005 general election. Since leaving politics, Portillo has pursued his media interests by presenting and participating in a wide range of television and radio programmes. Portillo's passion for steam trains led him to make the BBC documentary series Great British Railway Journeys, beginning in 2010, in which he travels the British railway networks, referring to various editions of Bradshaw's Guide. The success of the show led Portillo to present series about railway systems in other countries. 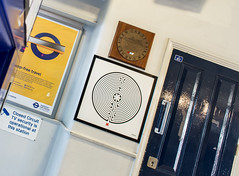