Rodney Terence Argent (born 14 June 1945) is an English musician, singer, songwriter, composer, and record producer. In a career spanning more than 50 years, Argent came to prominence in the mid 1960s as the founder and keyboardist of the English rock band The Zombies, and went on to form the band Argent after the first break-up of the Zombies. Argent is one of the main composers of the Zombies' music and made major lyrical contributions to the band's songs. As the band's keyboardist he used a variety of instruments, including the Mellotron, the harpsichord, and the organ. In addition to his work with the Zombies and Argent, Argent has made music for television series, been a session musician, produced albums by other artists, and has had a solo career which has included three studio albums: "Moving Home", "Red House", and "Classically Speaking".

band member of The Zombies 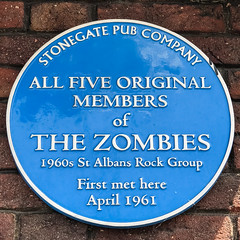