The City of Birmingham Symphony Orchestra (CBSO) is a British orchestra based in Birmingham, England. The Orchestra's current chief executive, appointed in 1999, is Stephen Maddock. Since 2008, the CBSO's music director is Andris Nelsons.
- OpenPlaques

The City of Birmingham Symphony Orchestra (CBSO) is a British orchestra based in Birmingham, England. It is the resident orchestra at Symphony Hall, Birmingham, which has been its principal performance venue since 1991. Its administrative and rehearsal base is at the nearby CBSO Centre, where it also presents chamber concerts by members of the orchestra and guest performers. Each year the orchestra performs more than 130 concerts to audiences totalling over 200,000 people. Another 72,000 people each year take part in its learning, participation and outreach events, and 750 local musicians are engaged in its six choirs and the CBSO Youth Orchestra. The CBSO's current Music Director is the Lithuanian conductor Mirga Gražinytė-Tyla, who took up her initial three year appointment in September 2016 at the age of 29. Kazuki Yamada is the orchestra's Principal Guest Conductor and Michael Seal is Associate Conductor. The CBSO's current chief executive, appointed in 1999, is Stephen Maddock. 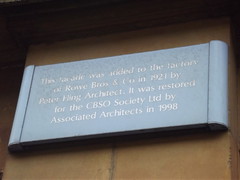 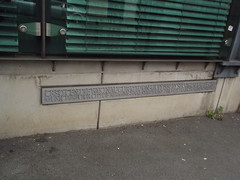 This facade was added to the factory of Rowe Bros & Co in 1921 by Peter Hing Architect. It was restored for the CBSO Society Ltd by Associated Architects in 1998

CBSO Centre, Berkley Street, Birmingham, United Kingdom where it was (1998)

CBSO Centre, Holliday Street, Birmingham, United Kingdom where it was (1998)