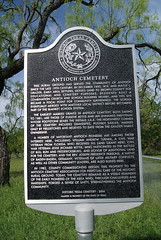 Antioch Cemetery. This burial ground has served the community of Antioch since the late 19th century. In December 1880, W.H. and Mattie l. Grazier, early area settlers, deeded the land to Brown County for educational and cemetery purposes. Residents built a combination church and school building nearby, and this site became a focal point for community gatherings. The school eventually merged with another local district before becoming part of the Blanket school system. The earliest marked graves in Antioch Cemetery, both dating to 1881, are those of Eugene Bettis and an unnamed individual whose footstone bears the initials J.A.R. The northwest corner of the cemetery includes gravesites, possibly earlier, marked only by fieldstones and believed to date from the Grazier family ownership. A number of important Antioch pioneers are among those interred here, including William Andrew Turner, a Civil War veteran from Florida who received his land grant here; Civil War veteran Jesse Richard Bettis, who participated in the battles of Bull Run and Fredericksburg, and donor of additional land for the cemetery; and the Rev. Joseph Frederick Parsons, a native of Baden-baden, Germany. Veterans of later military conflicts, as well as other community leaders, are also buried here. In 1982, county commissioners deeded this property to the Antioch Cemetery Association for perpetual care of the historic burial ground. Today, the cemetery remains as a visible reminder of the early pioneers of the area who, through challenges and hardships, forged a sense of unity, strengthening the Antioch community. #17423

?, Blanket, TX, United States where they was buried